This year the board of Central Ohio Safari Club International voted to make a sizable donation to the Bubye Valley Conservancy. We could think of few greater causes that so desperately need our support and do such great work for conserving African wildlife like the great African Lion. Please read more about their great work at http://bubyevalleyconservancy.com/

Laurent Delagrange of Indian Head Ranch and Mark Wehinger delivered a blue bag of medical supplies to Anne Whittall in Chiredzi, Zimbabwe. Mrs. Whittall nurses to approximately 500 people in the Save Conservancy. The medical care she provides is the only care within 3-4 hours.

Thank you Central Ohio SCI Members for your donations and helping us make this happen.

"Anne Whittall is a nurse educated in Cape Town at Groot Schuur University. Mrs. Whittall treats a community of over 500 people whose closest medical care is over 1.5 hours away by vehicle. Mrs. Whittall has been providing nursing care to the area for over 40 years. With the problems in Zimbabwe, even providing the most basic medical care has been difficult to impossible due to lack of supplies. We can't thank the Central Ohio Safari Club enough to allow us the honor of participating in the program and when you see the peoples’ faces, you will quickly understand why SCI and the hunters of the world participate."

Donations to the Wounded Warrior in Action Foundation

This important program is dedicated to helping heal our combat wounded service members through the power of the great outdoors. 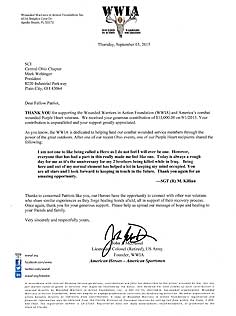 Mark Wehinger recently received a letter in September 2015 from the Wounded Warrior in Action Foundation, thanking the Central Ohio Chapter of SCI for it's generous donation of $15,000 to the program. The letter includes a moving quote from a soldier who was a participant in a recent Ohio WWIA outdoor event. Click here to read the letter. 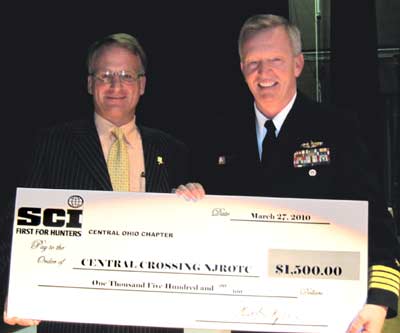 Thank you all again... you make it happen! 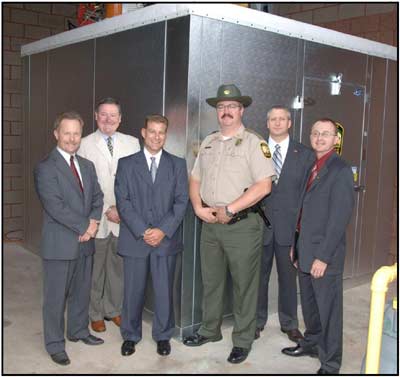 Tim McKelvey and I had the pleasure of attending the Ohio Division of Wildlife Officers’ graduation ceremony on June 29th. Thirteen people made it through the academy out of over 400 applicants; a testament to these individuals’ dedication and commitment. Following the ceremony, the Central Ohio Chapter of SCI was recognized for their involvement in making the new evidence freezer a reality for the Ohio Division of Wildlife.

Thank you again to the OH Division of Wildlife for inviting us to attend the graduation and thank you to all of our members of the SCI Central Ohio Chapter for your support in making these types of donations possible.

Joey Clegg writes...The trip to Indianhead Ranch in Del Rio, Texas, was a lot of fun. It was also a great learning experience. We did a lot of shooting, and we also learned many things which included how to use a GPS, and how to age and score a deer. The highlight of my trip was harvesting this black buck doe. I also learned about the many different kinds of animals they had there. We would go on trips around the ranch looking at the different animals there, which was cool because I had never seen these species of animals before. We also went on a campout in the back of the ranch, which was also a lot of fun. There was a spring you could swim in, and also a cavern with Indian writing in it. They had Native American researchers come and explain what the Indians were writing about and how they make the paint they used. They also showed us how to use an adladl, which is a wood piece you use to throw a spear. This trip was a really fun experience. Even though I was having fun, I was also learning a bunch of things, too. Thank you Central Ohio Chapter SCI!

Eric Delpra writes...My name is Eric. I recently took a trip to Indianhead Ranch for a week in June. Indianhead Ranch was a trip of a lifetime. The long plane rides were dreadful, but the experience was worth it. The bungalows were very nice as were the staff.

The views, scenery, and experiences were amazing. Every day was filled with fun activities and not a single day was boring. Learning new things at the ranch was fun. I learned how to load, shoot and clean a gun. Of course, we had to take a hunting course class and test at the end of the week, but it was worth it. We went out on an early morning hunt for Fallow deer. Within the first couple of hours I had my deer and was ready for breakfast. Indianhead staff took care of my deer and shipped it back home with me on the plane.

The adventure and learning experience with all the staff and other kids that was there was unforgettable. I would really like to thank Central Ohio Chapter SCI for giving me the opportunity and experience of a lifetime. 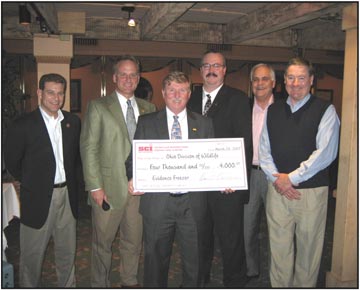 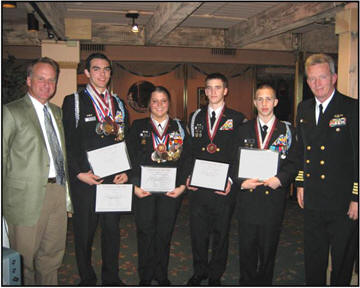 Central Oho Chapter once again donated to the Central Crossing NJROTC Rifle Team this year. They have won several National Air Rifle Championships, and were given their awards at the General Membership meeting by coach, Navy Captain Peter MacKay to show their appreciation to our chapter for being their sponsor. The awards were for recently winning at the Montgomery Bell Shooting Tournament in Nashville, Tenn. Central Crossing took first place, and set a new national team high score.

Congratulations to the Entire Team!

We will return in July to Bowling Green, Ky. to defend our Bronze medal (last year) at the National Junior Olympic Air Rifle Championship. You (Central Ohio Chapter SCI ) helped make it happen!

This represents a summary of organizations and programs to which the Central Ohio SCI Chapter has made significant donations in recent years.